One might say it was serendipity that brought Siri Lindley and Rebekah Keat into contact with their neighbor, Greg Bruening.

Lindley and Keat — both world-class triathletes — opened Believe Ranch and Rescue at their Boulder County home in January with the plan to take in horses purchased from livestock auctions and feedlots and find them homes.

But they needed more space. They posted flyers around their rural neighborhood near Boulder Reservoir, but they neglected dropping one off at Bruening’s home. As luck would have it, however, he came to them to ask if he could help himself to some of the earthy manure that accompanies equines.

It has worked out well.

“They got some land and I got horse (expletive),” Bruening joked.

“Greg’s got some horse whisperer in him,” Lindley added.

Lindley and Keat keep a pair of rescue horses, Cassie and Savannah, at their home, but four more reside on a roughly 7-acre plot behind Bruening’s home — Uncle, Tank, Angel and Angel’s mom, Gracy. (Angel developed an immediate taste for a reporter’s coat pockets and Uncle demanded chin scratches.)

Keat said the animals were destined to be crammed inside a semi-trailer with dozens of other horses and shipped to slaughterhouses in Mexico or Canada, where a market exists for horse meat.

“They are shipped in such terrible conditions,” she said. “Half of them will die.”

Keat and Lindley added that horses are more difficult to slaughter than cattle, which, in addition to the rough transport out of the country, can lead to immense suffering. The horses they bring home are quarantined to check for diseases and many of them are injured. Uncle, for example, currently has a bum knee that he is walking off.

The animals — many of whom are dumped by owners who no longer want to own a horse are usually traumatized and jumpy by the time they end up at the rescue and it can take some work to get the horses to trust people again.

“We don’t know their story,” Keat added. “We have to figure out a lot.”

The three remaining slaughterhouses that dealt in horse closed in 2007, but horses in the United States can still be sold and shipped to other country. While eating horse is taboo in the U.S., it is served in other countries.

The two women have so far raised about $19,000 leveraging their large social media presence in the triathlon world and have received financial backing from author and life coach Tony Robbins.

So far, they say they’ve rescued 31 horses, and they work to find permanent homes for the animals. They don’t charge people for the horses, but anyone who wants to adopt has to come out and spend time with the animals.

Lindley said they recently found a pair of horses a nice place in Weld County.

Donations to Believe Ranch and Rescue can be made at GoFundMe.com/believeranchandrescue.

The Associated Press contributed to this article. 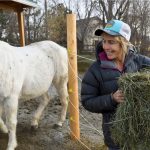